YOUR PARTNER ON THE ROAD 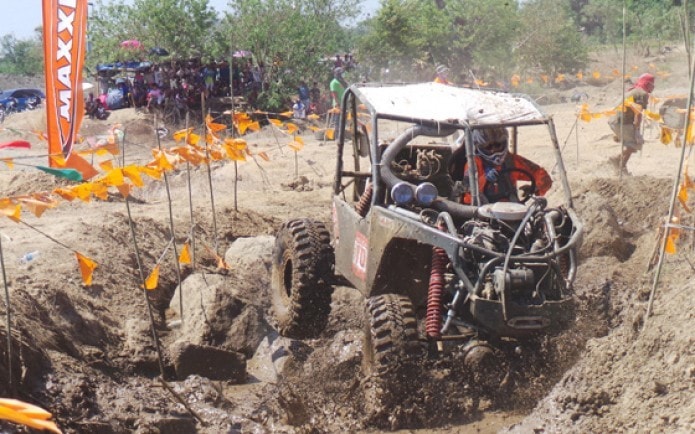 Maxxis Tires Philippines and the National Association of Filipino Off-roaders (NASFOR) recently concluded the 6th leg of the Maxxis 4×4 Cup, Extreme Off-road Challenge in scenic Bantay, Ilocos Sur. Maxxis 4×4 Cup is a highly grueling 13-leg extreme off-road racing series that pits extreme off-roaders from all over the country against each other.

Bantay which is approximately 137 kilometres north of San Fernando City, La Union, the Regional Capital of Ilocos Region, 406 kilometers from Manila and sitting just outside of historic Vigan was the perfect venue for such a competition as the picturesque town showcases both the beauty and toughness of nature.

Led by the honorable Bantay mayor Sonny Parilla, 28 off-roaders from different parts of the country were warmly welcomed by the local populace and off-road aficionados alike.

Fresh from the 5th leg of the Maxxis Cup held a week earlier in nearby Candon City, off-roaders were treated to a surprise when they discovered what was in store for them.

Aside from the highly technical track, clearly visible behind the race course was the famous Quirino Bridge which is the scenic arch bridge traversing the Abra River and is located between two beautiful mountains and is built to honor then-President Elpidio Quirino.

Friends, before and after the race, any affection they have for one another are thrown out as soon as they put their race faces at the starting line.

Unlike in Candon where the track was designed for speed, its Bantay counterpart was more technical. A lot more.

Some drivers doubled their time to complete the Bantay track as compared to the time they needed to finish the Candon track as the race track was laden with difficult obstacles designed to test the technical skills of the drivers.

For those who are not familiar with the event, competitors need to traverse two different courses labeled as track A and track B during their qualifying run with the top 20 drivers garnering the best combined times qualifying for the final round the following day. Each driver are given 20 minutes to complete each track.

For the final run, tracks A and B will be combined to form the final course otherwise known as track C. Sequence will be determined via drawing of lots with 20 minutes again to each driver to complete the course.

Final ranking of the competitors will be determined by the combined results of the riders for tracks A, B, and C.

The competitors who are used to attacking the toughest terrain using their vehicles’ brute power had to rely more on their precision driving skills this time around. Course obstacles for the Bantay track included a couple of mud pits, a log crossing that riders had to traverse three times and numerous sandy inclines that had spotters literally eat dust as their racers’ vehicles claw their way up each slippery slope.

Testament to the difficulty of the course saw 9 riders bow out in track A, 5 in track B, and 4 in track C.

Red Diwa of the Isabela Racing team won the race followed by Noel “JR” Bartolome, Jr. of the Land Cruiser Club of the Philippines. Rounding off the top three was Tonton Dungca of the Kapampangan Racing Team and is currently the leading Driver of the Year contender.

Diwa, who fared better than Bartolome and Dungca in track A had to deliver in the final track after his two closest rivals garnered better results in track B.

All three riders use the CL18 Land Dragon tires from Maxxis’ sister brand, CST. The Bantay leg saw the first win for this season for former driver of the year Red Diwa, a first-time CL18 user. One of the youngest racers, JR Bartolome, on the other hand, has just started using the Land dragons in the 5th leg in Candon City where he finished 3rd.

The 2014 Maxxis,Cup Extreme Off-road Challenge is presented by Maxxis Tires Philippines, in association with the National Association of Filipino Off-roaders (NASFOR) who also acts the event’s technical committee.

Equip your fleet to go the extra mile for the best value. Every CST commercial tire has a special tread compound and pattern that provides improved durability and extended mileage. Read more.